Having knowledge is akin to yielding power. The best way to handle a roofing issue with your asphalt shingle roof is to know what potential problems may arise and how to address them moving forward.

Lucky you because in the next five minutes or so, you’ll learn about the common problems associated with asphalt shingle roofs with this post. Read on for valuable insights.

Blistering or the expanding of some sections of roof shingles are among the most common shingle roof issues that roof repair companies can fix in a jiffy.

It takes place when moisture enters the shingles during the manufacturing process. Asphalt shingles consist of fiberglass backing, asphalt coating, and a top layer of granules. When moisture finds its way into any of the layers, the risk of blistering increases.

Plus, shingle blistering is also caused by poor ventilation. It’s said that a well-ventilated property is necessary to avoid shingle blistering. Irrespective of the cause, blistering should be addressed sooner or later as it can cause significant damage if left untreated.

Additionally, just like blistering, curling can be caused by poor ventilation wherein moisture collects inside the shingles over time. When the moisture evaporates, the shape of the shingles starts changing which causes a curling effect.

Curling can also occur when the shingles are nearing the end of their lifetime. Once the shingles hit their life expectancy limit, they begin contracting and curling upwards. This is usually an indication that the roof needs renovation.

Furthermore, curling can be caused by a situation called thermal shock. Thermal shock is when high temperatures of the roof drop suddenly. For example, on a sunny day, shingles absorb heat which increases the roof temperature.

If the weather changes abruptly and cools down, it causes the roof temperatures to drop. If this process happens repeatedly, it causes shrinking of the shingles, causing a curling effect.

Like blistering, curling can result in roof failure if left unchecked. Once you notice any signs of curling, it’s best to get it fixed immediately.

Cracking is also a common issue with asphalt shingle roofs. When shingles get old, it’s normal for them to crack. Luckily, it’s straightforward to spot a crack as it’s more visible. Cracking can also be caused by strong winds, thermal movement, and roof stress.

Be aware of any premature cracking on a newer roof. This could mean an inadequate ventilation system on your roof, incorrect roof installation, or a manufacturer defect in the product.

Cracking shingles should be addressed immediately after they’re spotted since they can cause more significant damage to your property in the future if left unattended. 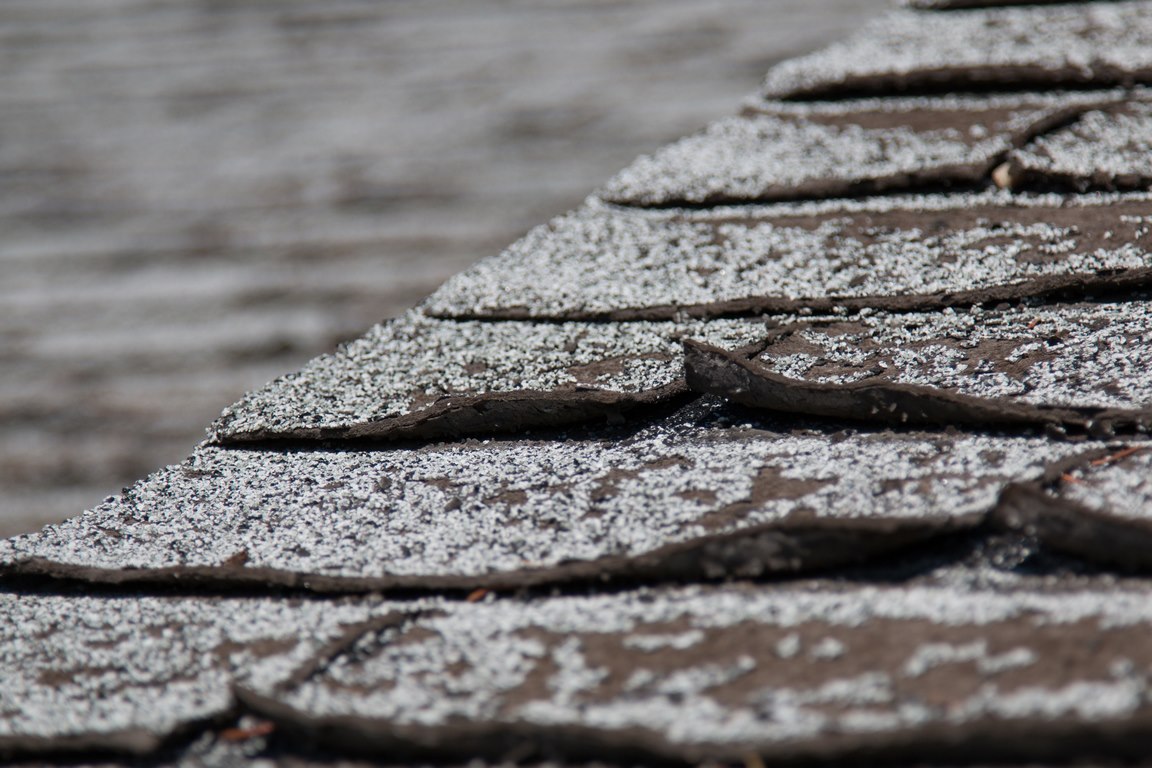 Granules offer asphalt shingles with a protective layer against ultraviolet exposure and other elements. Unfortunately, all shingle roofs experience granule loss over time.

Granule loss is when the top protective layer detaches and falls off.  However, if there’s severe granule loss, it could be because of overheating that melts the shingles, poor ventilation, or the granules weren’t applied evenly throughout the shingle.

If severe loss of granules isn’t addressed, it can lead to blocked gutters, damage to the exposed roof section, leaking, and general roof structure failure.

Shingles are placed piece by piece; hence, one or two shingles may detach and fall off. This can be due to strong wind, an impact on the roof that disengages a shingle, poor shingle sealing, or if the sealing at the back of the shingle breaks.

When you notice a missing shingle, you should get it replaced immediately. Leaving it unfixed exposes sections of the roof to the outdoors, thus creating another problem over the missing shingle.

That’s it. Those are the common problems that can affect an asphalt shingle roof. Hopefully, the tips mentioned above will enlighten you to ensure you’re aware of any potential roofing issues.

It’s highly recommended that you choose a reputable professional for professional installation and doing periodic roof checks and maintenance.